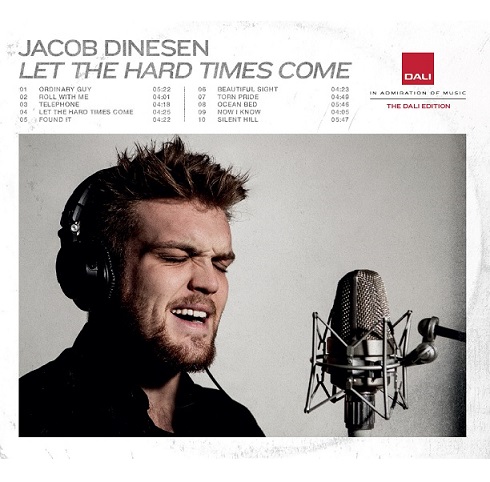 Ladies and Gentlemen - we give you Jacob Dinesen, a well established Danish singer-songwriter, who not only has an incredible and powerful voice, but he is also an impeccable guitarist. Let The Hard Times Come truly reveals Jacob's roots in the rock genre with a touch of folk and American song writing.

At DALI they praise music, especially when performed with heart and soul. It's no great secret among audiophile music lovers around the world that the standard of sound quality in new releases are in steady decline. In the quest for even more compressed "loud" sound, in order to meet the demands from streaming services and radio stations, the industry has committed the cardinal sin of single-mindedly employing ever increasing levels of dynamic compression. This is to such an extent that in most of today's chartoriented pop music, dynamic contrasts and "air" are largely absent, removing dynamic peaks along with pauses and breathing space for the ears. Unfortunately, for all of us who love listening to music, this trend often results in recordings lacking nerve, presence and authenticity.

This special edition of Let The Hard Times Come differs from the original album by a slightly more "audiophile" mastering as well as a few changes in track titles. With this release, DALI pays tribute to the honest reproduction of music and they hope to give fans of hi-fi the best possible sound experience, with an opportunity to really get under the skin of this talented musician.

A WORD FROM JACOB:

»'Let The Hard Times Come' is my very first acoustic release, a release that has been on my bucket list for years. The dream was to record a live studio album, played by heart and ear. It was a bit nerve wrecking as my songs, which I have played so many times with the band, all of a sudden were very much focused on my vocal performance. I hope you will experience that the outcome is 8 honest interpretations performed with nerve and presence.

We recorded over 3 intense days (and very late nights) back in January 2020. With me, in the legendary Lundgaard Studio in Vejen, Denmark, I had my bass player and my drummer (both play mates from the Jacob Dinesen Band,) while I played the rest of the instruments appearing on this album.

It was an incredibly joyful yet intense experience and I'm really proud of the result; 8 soulful stripped back "onetakers" which reflects on the days when I carried my guitar on my back, touring the pubs and clubs in the areas around my hometown with a profound need to get all these songs I had in me out, to everyone who cared to listen.

2 of the songs have never been released on album before. 'Let The Hard Times Come' is recorded for the physical media - the album will therefore NOT be released for download or streaming in the near future.«

See everything with Jacob Dinesen (e.g. CD and LP)